What Should You Know About Kelowna, BC?

Kelowna, British Columbia is a beautiful major city located in the heart of the Okanagan Valley. With its stunning Knox mountain view, rose valley and lake views , world-class wineries, and abundance of outdoor activities, Kelowna is the perfect destination for travelers looking to relax and explore. But what else should you know about Kelowna?

Read more about the city of Kelowna >> 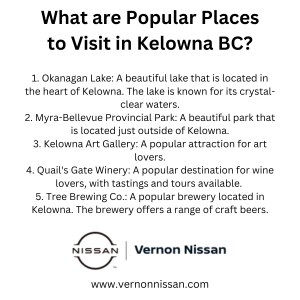 What are Popular Places to Visit in Kelowna BC?

In this article, we will delve into the city’s history, economy, and culture to give you a better understanding of what makes Kelowna such a special place. Whether you are planning a visit or just curious about this vibrant city, this article will provide you with all the information you need to know about Kelowna.

What is Kelowna’s History and Geography?

Kelowna is a city located in the Okanagan Valley in the southern interior of British Columbia, Canada. The city has a long and rich history that dates back thousands of years. The region was first inhabited by the Okanagan people, who were a First Nations group that lived in the area for hundreds of generations.

The city of Kelowna was founded in the late 1800s, and it was named after the Okanagan people’s term for “grizzly bear.” The city quickly grew and developed into a thriving agricultural and tourism destination, with the growth of the fruit industry and the development of the Okanagan Lake as a popular summer vacation spot. Today, Kelowna is a vibrant and diverse city that is known for its natural beauty, world-class wineries, and thriving arts and culture scenes.

Geographically, Kelowna is situated in the Okanagan Valley, which is a long, narrow valley that stretches from the border of the United States to the north of the province. The valley is surrounded by mountains, including the Okanagan Mountain Park to the north and the Monashee Mountains to the east.

The valley is also home to numerous lakes, including Okanagan Lake, which is the largest lake in the region and a popular destination for water sports. The city of Kelowna is located on the shores of Okanagan Lake, and it is known for its beautiful lake and mountain views.

What Are the Available Employment and Education Opportunities in Kelowna?

Kelowna is a city that offers a range of employment and education opportunities for its residents and visitors. The city has a strong and diverse economy that is driven by a number of key industries, including tourism, agriculture, technology, and manufacturing.

One of the major industries in Kelowna is tourism, which is a significant contributor to the local economy. The city is home to numerous hotels, ski resorts, a waterfront park, restaurants, and attractions that attract visitors from all over the world. There are also a number of wineries in the Okanagan Valley, which are popular with tourists and provide a range of employment opportunities.

Agriculture is another important industry in Kelowna, with the city and the surrounding region being known for its fruit orchards and vineyards. The city is home to a number of fruit packing and processing facilities, as well as a number of small and medium-sized farms.

In recent years, Kelowna has also become a hub for technology and manufacturing. The city is home to a number of tech startups and larger companies, including Telus and Interior Health. There are also a number of manufacturing companies in the region that produce a range of products, including construction materials, aircraft parts, and automotive components.

In terms of education, Kelowna is home to a number of public and private schools. There is also a Kelowna Christian school as well as Okanagan College, a public post-secondary institution that offers a range of certificate, diploma, and degree programs. The city is also home to the University of British Columbia’s Okanagan campus, which offers a range of undergraduate and graduate programs in a variety of disciplines.

Overall, Kelowna is a city that offers a range of employment and education opportunities for its residents and visitors.

What is Sports Culture and Community Life Like in Kelowna?

Kelowna is a city with a thriving sports, culture, and community life. In terms of culture, Downtown Kelowna has a thriving arts and culture scene, with numerous galleries, museums, and theatres to explore.In terms of community life, Kelowna is a city with a strong sense of community and a high quality of life. The city is home to a number of parks, trails, and green spaces, which provide opportunities for residents to get outdoors and enjoy the natural beauty of the region.

The city is home to a number of sports teams and facilities, including a major junior hockey team. The city is also home to the Kelowna Falcons, a collegiate summer baseball team, and the Okanagan Sun, a Canadian Junior Football team.

The Kelowna Art Gallery showcases works by local and international artists, while the Kelowna Museum offers exhibits on the history of the Okanagan Valley. The city is also home to a number of festivals and events, including the Kelowna International Film Festival and the Okanagan Wine Festival.

The city is also home to a number of community centers and facilities, including libraries, swimming pools, and ice rinks. Overall, Kelowna is a city that offers a range of sports, cultural, and community activities for its residents and visitors.

What are the Popular Places to Visit in Kelowna, BC?

Kelowna is a city with a wealth of things to see and do. Here are some of the top places to visit in and around Kelowna:

1. Okanagan Lake: Okanagan Lake is a beautiful lake that is located in the heart of Kelowna. The lake is known for its crystal-clear waters and is a popular destination for swimming, boating, and other water sports. The lake is also home to a number of beaches, including Kelowna City Park Beach and Hot Sands Beach.

4. Quail’s Gate Winery: Quail’s Gate Winery is a popular destination for wine lovers, with tastings and tours available. The winery is located in the heart of the Okanagan Valley and is known for its excellent Cabernet Sauvignon wines.

Overall, Kelowna and the surrounding region have a wealth of things to see and do, from outdoor activities to cultural attractions. No matter what you’re interested in, there is something for everyone in Kelowna.

With its stunning mountain and lake views, world-class wineries, and abundance of outdoor activities, Kelowna is the perfect destination for travelers looking to relax and explore. As soon as you land on the Kelowna International Airport, exploring north, south and west Kelowna and even visiting the Kelowna waterfront is definitely worth the travel. Here is a guide to help you plan your visit to Kelowna:

Kelowna is surrounded by breathtaking natural beauty, making it the perfect place to enjoy outdoor activities such as hiking, biking, and water sports. The city is home to numerous parks, including the popular Myra-Bellevue Provincial Park, which offers miles of hiking trails and beautiful views of the Okanagan Valley. In the summer, you can also take a dip in one of the many beaches, including Kelowna City Park Beach and Hot Sands Beach.

Kelowna is known for its world-class wineries, with over 100 wineries in the Okanagan Valley. Many of these wineries offer tastings and tours, giving you the opportunity to sample some of the best wines in the region. If you’re a fan of red wines, be sure to visit Quail’s Gate Winery and Mission Hill Family Estate, both of which are known for their excellent Cabernet Sauvignons. If you prefer whites, don’t miss out on the Rieslings from Summerhill Pyramid Winery and the Chardonnays from Gray Monk Estate Winery.

Kelowna is home to a thriving arts and culture scene, with numerous galleries, museums, and theaters to explore. The Kelowna Art Gallery showcases works by local and international artists, while the Kelowna Museum offers exhibits on the history of the Okanagan Valley. The Prospera Place arena is also home to the Kelowna Rockets, a junior ice hockey team that is a popular attraction for sports fans.

Kelowna’s culinary scene is diverse and delicious, with a wide variety of restaurants, cafes, and breweries to choose from. The city is known for its farm-to-table movement, with many restaurants featuring locally sourced ingredients. Be sure to try some of the region’s famous Okanagan fruit, including cherries, peaches, and apples. If you’re a craft beer lover, you’ll also find plenty of breweries to explore, including Tree Brewing Co. and the BNA Brewing Co. & Eatery. No matter what you’re interested in, Kelowna has something for everyone. Whether you’re looking to relax and enjoy the natural beauty of the Okanagan Valley or experience the city’s thriving arts and culture scene, Kelowna is a must-visit destination. Are you planning your trip or planning on living in Kelowna? Kelowna has annual events, wine tours, great secondary schools and a waterfront park. You’ll never regret spending a weekend in Kelowna. This Canadian city has a lot to offer.

Kelowna (/kəˈloʊnə/ kə-LOH-nə) is a city on Okanagan Lake in the Okanagan Valley in the southern interior of British Columbia, Canada. It serves as the head office of the Regional District of Central Okanagan. The name Kelowna derives from the Okanagan word kiʔláwnaʔ, referring to a male grizzly bear.

Kelowna BC in Wikidata

Kelowna BC in Google Maps